Examples of the requirements for foster parents: 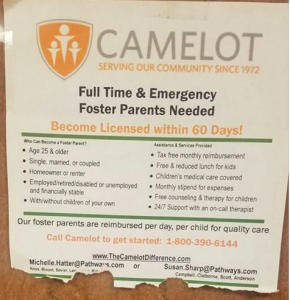 Requirements for Foster/Adopt Families
Basic Requirements
The prospective foster/adoptive parents may be single or married and must:
• be at least 21 years of age, financially stable, and responsible mature adults,
• complete an application (staff will assist you, if you prefer),
• share information regarding their background and lifestyle,
• provide relative and non-relative references,
• show proof of marriage and/or divorce (if applicable),
• agree to a home study which includes visits with all household members,
• allow staff to complete a criminal history background check and an abuse/neglect check on all adults in the household, and
• attend free training to learn about issues of abused and neglected children.
The training provides an opportunity for the family and DFPS to assess whether foster care or adoption is best for the family. The family may withdraw from the meetings at any time. There is no charge for the meetings. Foster/adoptive parents generally train together.

Additional Foster Care Requirements
In addition to the basic requirements, foster parents must:
• have adequate sleeping space.
• allow no more than 6 children in the home including your own children or children for whom you provide day care.
• agree to a nonphysical discipline policy.
• permit fire, health and safety inspections of the home.
• vaccinate all pets.
• obtain and maintain CPR/First Aid Certification.
• obtain TB testing as required by the local Health Department for household members.
• attend 20 hours or more of training each year.

Responsibilities of Foster and Adoptive Families
Foster Parents:
• provide daily care and nurturing of children in foster care;
• advocate for children in their schools and communities;
• inform the children’s caseworkers about adjustments to the home, school, and community, as well as any problems that may arise, including any serious illnesses, accidents, or serious occurrences involving the foster children or their own families;
• make efforts as team members with children’s caseworkers towards reunifying children with their birth families;
• provide a positive role model to birth families and
• help children learn life skills.
Adoptive Parents:
• provide permanent homes and a lifelong commitment to children into adulthood;
• provide for the short-term and long-term needs of children;
• provide for children’s emotional, mental, physical, social, educational, and cultural needs, according to each child’s developmental age and growth;
• may become certified as a foster family and accept children who are not legally free for adoption, but whose permanency plan is adoption.

Government: “We will not deprive you/us of our income derived from having a foster child, not even if you are abusing children – we have corrective actions which will give you 6 months to correct your behaviour. Also, if we can, we will attempt to cover-up your behaviour. We do not want to close foster homes.”

https://www.dfps.state.tx.us/handbooks/CPS/Files/CPS_px_7430.asp
Appendix 7430: Guidelines for [foster home] Corrective Action and Closure CPS 97-2
The purpose of the guidelines is to help staff work with foster parents when corrective action is needed. Monitoring of a corrective action plan should be based on the individual situation and may be monthly or more frequent if appropriate. We do not want to close foster homes, unless their behaviour is detrimental to foster children and to achieving a child’s permanency plan. If needed, a corrective action plan should be used to help people recognise the changes they need to make and to monitor their progress. If a foster family is unable or unwilling to make the required changes, it is appropriate to close the home. Developmental planning objectives should be clearly described, measurable, and mutually agreed upon if possible.
Time Frame
Under normal circumstances a six-month corrective plan may be reasonable with the foster parent and case worker evaluating the progress at least at mid-point. For behaviours that have a significant negative impact on the child, immediate discontinuation of the behaviour is expected…

Comments on the foster care or child protection system:

https://www.denverpost.com/2012/11/10/abused-childrens-cries-for-help-were-ignored-2/
The system is plagued by a lack of accountability and transparency — every county in Colorado decides how to run its own child protection department, with minimal input from the state. It is so disjointed, state officials cannot pinpoint the average workload of caseworkers, and cannot fire or discipline a county employee.
Despite years of warnings from expert panels and earnest expressions of concern from three governors and legions of legislators, Colorado’s $375 million system to protect kids from dying remains stubbornly broken.