The following is an example of this husband’s relentless attempts to provoke me into emotional outbursts. I quote his words in his diary to the respected country’s court:

I went upstairs to get them a bedtime story book from the bookshelf. The wife pushed me away from her side of the bookshelf and told me those were her books and for me to get my own children story book to read to them.

I then took a book: “Eden’s exiles, one soldiers fight for paradise” It is about the fight against animal poaching.

I thought it to be a good idea to tell the boys about my background who at times had a role in this battle.

I started reading and telling the boys about this and showed them some pictures in the book. The next thing the wife grabbed the book from me and started yelling at me in front of the boys what do I think I am doing reading a book like this to them about soldiers and dead animals! She did her best to get me to loose my temper! I have a definitive feeling that my wife has a mental disturbance which needs urgent attention and treatment.

The following are three pages of the four pages containing pictures in “EDEN’S EXILES, ONE SOLDIER’S FIGHT FOR PARADISE” 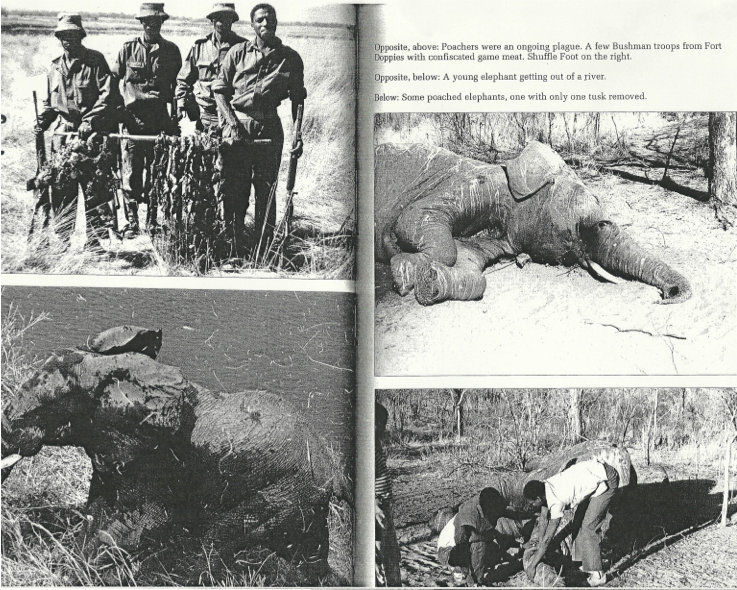 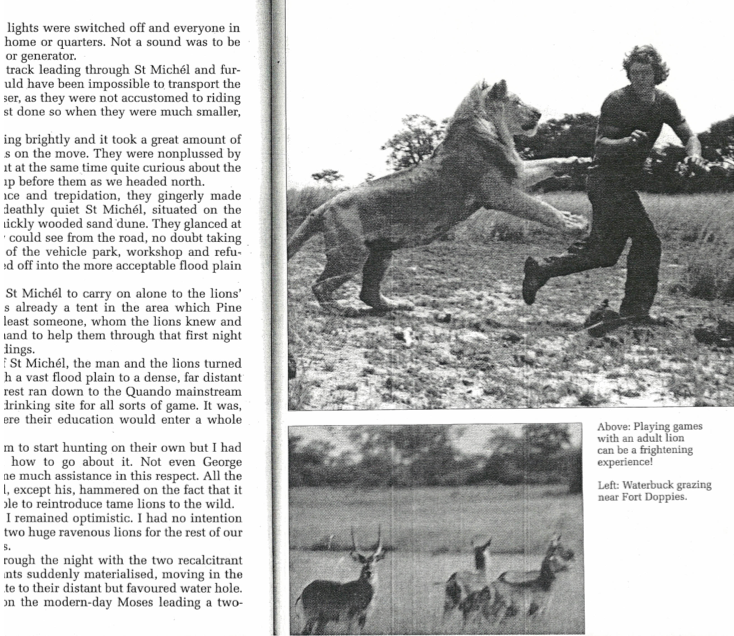 In court, this father did not attach these pictures he showed his small children for a bedtime story.
He does say the following in one of his statements: The wife has a habit of scaring the children by telling them stories of animals and monsters biting little boys.
Apart from the above pictures being scary and not entertainment for children ages 5, 3 and 2, there is also a picture of a lion chasing a man. My second child was having nightmares of a lion by his bed at night. He had talked about this since he could talk. He regularly woke up in the middle of the night, screaming with a tantrum. This father, being fully aware of his child’s nightmares and fears shows this picture to this child for bedtime.
This father never got involved with the children’s reading at night time. He did not know where their books are. He never bought them a book to read.
But, after I had gone to the police, this father becomes involved and these are the pictures he chooses to show to his children for a bedtime story.

He wanted to upset me on purpose. He knew I got upset when someone scared my children. He used my anger that was directly caused by what he is doing. Then he claims: The wife would relentlessly attempt to provoke me into losing my temper. It is very clear that her aim is to solicit me and provoke me to do something wrong which she then can hold against me!
He projected his motives onto me. It is now clear that he was writing a diary for court and needed material to use against me.
After this father’s unfeeling actions of showing dead animals, solders and a lion chasing a man to his small children before bedtime and me getting upset about it, this father in his diary adds:
I have a definite feeling that my wife has a mental disturbance which needs urgent attention and treatment.

According to this father in his statements on why he is refusing me any telephone contact with my children are the following, I quote him:
I did speak to the wife telephonically during the course of May/June/July 2012 and told her not to upset the children by talking to them about monsters and wild animals biting them, or to question them about such things.
This father continues saying, and I quote: I told her that I believed her actions to be upsetting to the children and not the reassurance that the children required from her.
One of these father’s “games” with our children involved him physically standing on all fours, making grunting noises and continually pressing his face into their bodies and making biting actions on it, while pulling them back into a lying position in front of him when they tried to get away.
These children told me that he, this father, takes them to a place, they call the “zoo”. He takes them there when he tells me he is going to the bank. At this “zoo” animals “bite” them in rooms. People are not dressed like animals, but they “bite”. This father leaves them alone with the people at the “zoo” while he is busy with his “bad things”.
None of the above resembles normal circumstances for a zoo. But, now this father stresses that one should not ask these children on what happens at the “zoo” where their daddy takes them.
Is a zoo with it’s animals such an upsetting place for a child?
This father himself states, and I quote: All three boys, but more so the eldest two, have very vivid imaginations. They love animals and fondly remember a visit to the zoo quite some time ago.
These children fondly remember the zoo and love animals, but don’t question the children on their fond visit! This father says questions on the zoo the children say he takes them to, will give these children phobia’s, scare and upset them.

This father likes to portray himself as a “good guy”. Hence this line in his diary and I quote: I thought it to be a good idea to tell the boys about my background who at times had a role in this battle. (Referring to: One soldier’s fight for paradise)
“This battle” is the fight between the people preventing animal killing/poaching and the people killing animals. This father, however, does not clearly identify his role in this battle.

This father does, to today still, at times, have a role. His “role” is the animal killer. This father loves shooting at everything that moves with his bow and arrow. He clobbers animals to death. When this happens he tells his small children the animals are being naughty and that this is why he kills them.

When he showed them this book he told them he had saved animals from bad people that kill them.